Years ago, having recently relocated to Atlanta, I was out having a drink at MJQ when I first encountered live screenprinting hosted by Mindzai. The small manual press was being run by Jesse Jaeger who later became a friend of mine and coworker, and I bought a shirt that he printed on the spot. I have kept and worn that shirt in the years since and the experience opened my eyes to the Atlanta print service industry.

It was a couple of years later when I started following Mindzai on social media, and saw a post looking for an intern. I applied and worked as an unpaid intern for a bit which in turn led to me scoring a job there. It was a really defining period of my career and I’ve remained close with my former coworkers. Recently I swung by to take some pictures and chat with manager Susannah Caviness about what its like to work in art production.

Susannah manages the Atlanta branch of the business, which means she fills a variety of roles. “I handle everything from print production, marketing, client relations… the normal day-to-day operations,” she told me. Additionally she organizes art shows in the art gallery space, a relatively new addition to the Atlanta office.

“We’re a really small business and rely on a very small staff to make things happen,” Susannah explained. “I feel fortunate to be surrounded by creative and like-minded people who want to push Mindzai forward.” The shop, currently located in O4W, caters to the local arts and small business community. 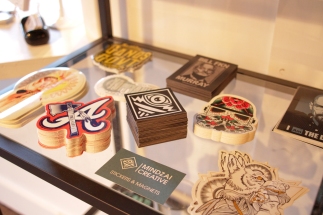 “We also began another side of the business, Mindzai Apparel. It’s our own apparel line featuring work commissioned by various tattooers, artists, and illustrators, which has really taken off,” Susannah said, showing me the shirts on display in the gallery. They are currently running a design competition for their merch, so check it out! More info here. 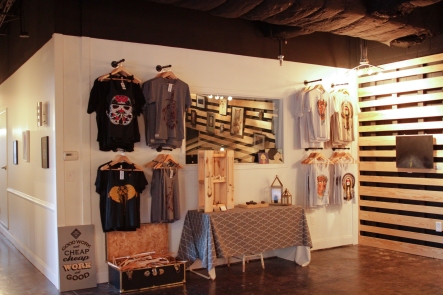 Mindzai uses their gallery space to sell the works of local artists including jewelry, prints, housewares and other cool stuff that Susannah comes across. The shop is open to visitors during normal print studio business hours, Monday through Friday from 10-6.

Mindzai is owned by Scott Weatherwax who lives in Austin, TX who runs a Mindzai branch there. His affinity for the arts and his connections with the tattoo community across the country have helped to make the company what it is today.

“Mindzai started out as a recording studio,” Susannah explained. “Scott has a background in the music industry like myself, and that’s where Mindzai initially got its start. Clients began requesting things like CD duplication, then it became graphic design, which became mixtape covers. It just sort of snowballed into Mindzai becoming a print and design studio as well, and we’ve been running for almost 20 years now.”

“We dropped CD duplication services last year and began to see a steady incline and shift in products people requested. We now offer high quality art prints, screen printing, die cut stickers and the usual suspects like postcards and business cards,” Susannah said. Their fine art printing services and expertise in the matter are a godsend for many local artists who produce their own work.

A mark of Mindzai’s success is their continued presence within the Atlanta art community. As a company, they sponsor artist-oriented events, maintain a presence at conventions and festivals, and are behind many of the companies and organizations within the communities they serve.

“I have always liked working with musicians, artists, and small business owners,” Susannah told me. “Underdogs, so to speak. I love any project where we can take someone’s vision and turn it into a tangible thing. Screen printing is one of my favorite aspects of Mindzai.”

Mindzai currently shares the space with Odditees, a screen printing company. Print tech Philip Jaggar and owner Gary Stanton pause for a picture in the shop.

The space houses an automatic and manual press, the latter being run in the background by Odditees employee Chris Snodgrass.

The company is not so mainstream, however, and they aren’t afraid to push the limits with content and curse words. I asked Susannah if she had any memorable experiences from the two and a half years she’s been working at Mindzai. “My favorite story is an Austin client who left the longest voicemail. We used to have flyers that said something along the lines of ‘No Bullshit’ on them. I guess he saw it and felt the need to call us, and specifically said we needed to get right with God and that our mothers didn’t raise us right. I saved it for the longest time, I thought it was hilarious.” 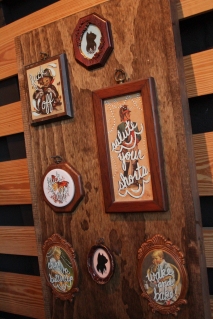 Susannah and employee Lindsay Marr in the Mindzai office.

This Friday evening, February 6 Mindzai ATL will be hosting an Art Basel Recap show from 7-11pm. I’ll be there with my camera, and there will be free PBR, limited edition prints for sale from over a dozen artists. The shop is currently located in Thunderbox at 728 Ralph McGill Blvd, Atlanta GA, 30312. 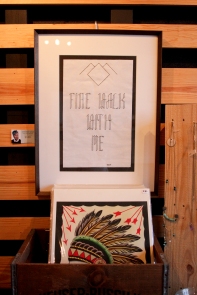 Susannah also wanted to say something directly to Mindzai’s clients; “a huge thank you to all our clients, friends and family who have stuck with us over the years and believed in our vision.” The building that currently houses the shop is slated to be sold which will cause a certain amount of change and necessitate a move, but Susannah didn’t waiver in her commitment to serve her clients. “Mindzai isn’t going anywhere.” 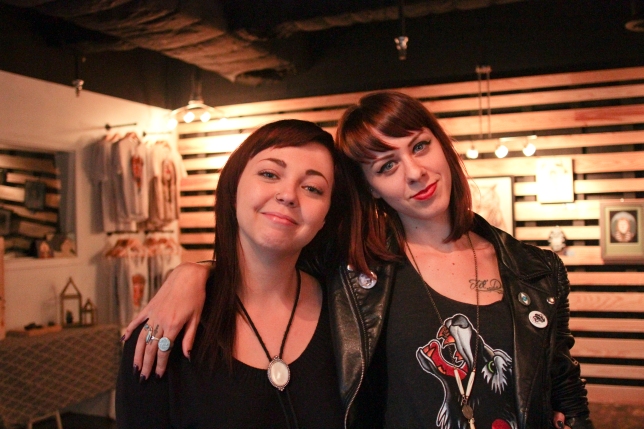 The girls of Mindzai ATL.
Find out more about this badass local shop by going to their website, Facebook, following them on Twitter and Instagram, and come out to the show this week!
-Is

Get in touch! Cancel reply