If you’re anything like me, you may have wondered at one time or another what mystery lays behind this door in Inman Park. 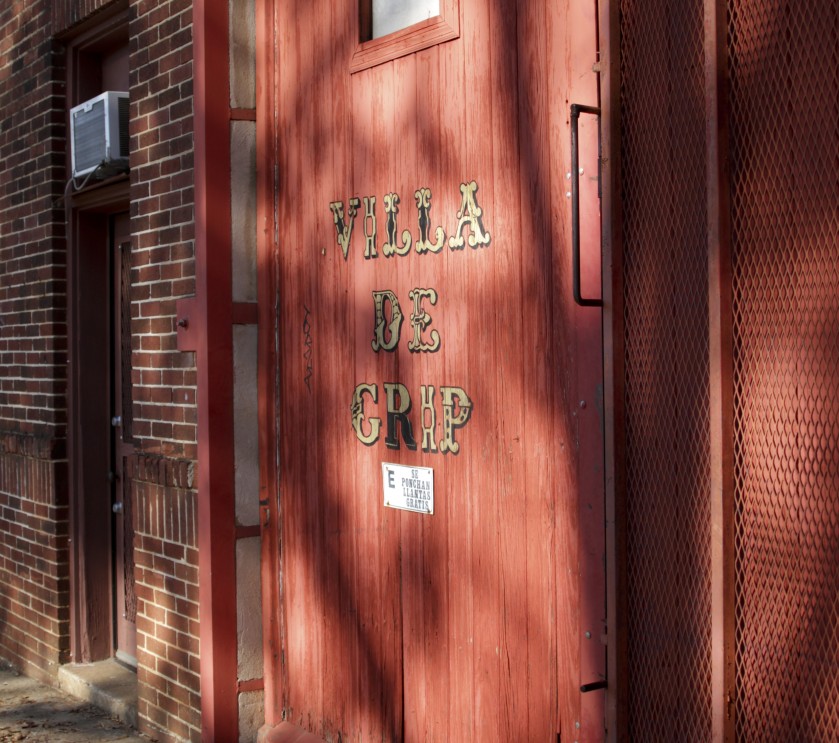 I was lucky enough to get a chance to see inside The Workshop when I went there to meet with Raymond Carr, my friend and local puppeteer in the early hours of Halloween day. 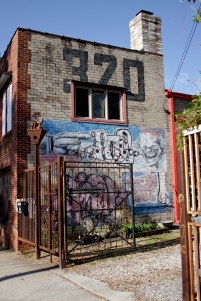 The space is a conglomeration of different things and areas devoted to different organizations. The tall ceiling features a few skylights that bring attention to the large puppets hanging from the rafters. Work areas can be found along each wall and recessed into every corner. 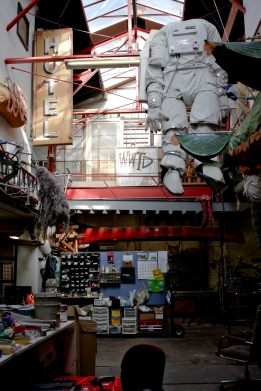 There are buckets of spraypaint cans, rolls upon rolls of tape, and tools for woodworking as far as the eye can see.

Hidden pieces of art poke out from shelves, lean over railings, and dangle from the ceiling. On any given workspace there are sketches, craft supplies and tools.

Raymond met me and brought me around to the back of the building to see the giant, one-eyed robot speaker puppet he was finishing up for the Scoutmob Halloween Party at the Goat Farm later that night. The lumbering structure sat leaning forward, silver arms and legs splayed out around it on the ground underneath it. We spoke for a while about the difficulties of building this puppet in particular, including the mechanism sticking out of the back that would act as the suspension to raise the monster up and make it walk. He showed me the pulley system that made the eye move in its socket and made the mouth open and close, as well as gave me a run down of his loyal team of puppet masters.

Back inside we sat down and spoke about his career. “I’m a freelance artist and I’ve been doing this since I was a kid,” he told me. Raymond is the son of children’s ministers who worked in a megachurch, and that is where his desire to create began.

Carr relocated from the West Coast to Atlanta, received his degree in film from Georgia State University, and interned at The Center for Puppetry Arts where he eventually became a puppeteer and focused on experimental puppetry theater.

The Center for Puppetry Arts is the largest organization dedicated to the art form of puppetry in the nation, and includes a museum, education center, and performance space. The center is located in midtown near Atlantic Station and is open 7 days a week. Click here to see their Facebook page, learn more about upcoming events, and check it out for yourself!

“That was my first real chance to experience a full time artist’s life,” Raymond said of the experience, which helped to set the tone for his career path. Later he began working in the film industry as a PA and then from there worked his way into the art department on local film sets. 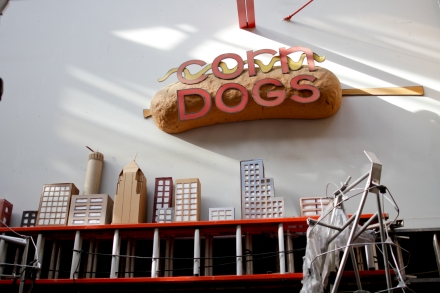 Raymond’s career took a leap when he became involved with a show called Lazy Town for which he spent a year living in Iceland. The production is an educational musical children’s television program utilizing a talented multinational crew and is a combination of live action, puppetry, and CGI animation.

In 2006, Raymond began working with a touring show called Walking with Dinosaurs on the North American tour. The performance was one of the largest touring shows in the world at the time. “It was like Springsteen, and then U2, and then us,” Raymond told me. The program is based on a BBC television series and incorporates 20 life-size dinosaurs designed by scientists and master puppeteers. It was a huge production with many moving parts, including 25 semi trucks and 75 crew members.

So there he was, 26 years old, traveling and living abroad for an international live performance with life-size dinosaur puppets, working as the head of animatronics puppetry for two years.  According to Raymond, the crew referred to the animatronics group as voodoo puppeteers because they operated remotely, he told me with a laugh.

I remarked that 26 is pretty young to have that much responsibility. “Yeah. It was a weird time because I was also the youngest person in my department,” Raymond conceded, “So it got awkward at times.” 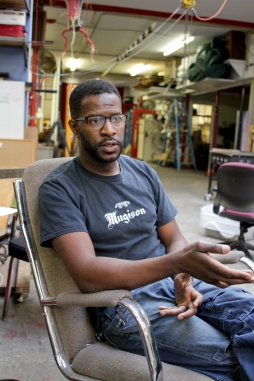 Upon his exit from the show, Carr returned to Atlanta and hit the ground running in film and production and started his own production company, Ninja Puppet Productions. You can see some of that work at their website and Facebook. With seemingly limitless energy, he threw himself into theater and film, and recently with his performance partner Raymond Tilton put on a large, successful theater performance called This Darker Life at the Goat Farm’s Gibson Yard in late October.

The show, a performance immersion devised from five original stories, was a coordinated effort with five artists. Among other challenges, Raymond spoke of the logistics that go into a performance that included aerial projections, giant puppets, multiple storylines and locations, and nearly total darkness. Structurally, the performance was unusual in that the 60 person audience sat on a platform in the middle of the room in a spotlight, and the audience’s platform itself rotated periodically to face different playing areas. The action occurred around and throughout the audience, and involved a cast of 10 people.

“That doesn’t really happen very often so we were all just sort of making it up as we went along,” Raymond said, referring to the lazy Susan aspect of the production. “When it works, it’s great… when it doesn’t work it’s just terrifying and awful,” he laughed. “It worked, fortunately, and it was a big success.”

Recently, Raymond also did some work in San Francisco for Dropbox, creating an online recruitment video using puppets. For that campaign, the company interviewed their employees about what it was like to work at Dropbox and then he built puppets based on their mannerisms and features. Unlike the majority of his work, this was building characters based on real people. It would seem that in the line of work that Carr ascribes to there are always new concepts, new ideas, and new challenges.

I also asked Carr about his experiences within the puppeteer community in Atlanta, noting that he was one of the few people I knew who actively worked in that field. His response and breadth of knowledge at once surprised me and was exactly what you would expect from someone like Raymond.

He told me about the variety of roles for puppet workers, including those who like himself work in “muppet style… which is what you’d consider traditional style puppetry,” as well as children’s performers, the puppet slam network, puppetry for film and television, late night adult puppet shows, the Dragon*Con puppet track, and the local theater community such as Dad’s Garage whose performances often incorporate puppetry.

You may have seen SpeakerBot at the Goat Farm this Halloween, or maybe you ran into the hulking Space Man from last year’s celebration or during the Lantern Parade, or perhaps you’ve seen some extra large marine life puppets hanging around the aquarium- however you come across Raymond Carr and his work, you’re not likely to forget the experience.

Check out his Facebook page and website to keep in the loop about upcoming events and performances!

Get in touch! Cancel reply